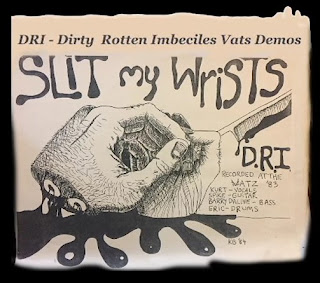 This is one of the best D.R.I. recordings of all time in my opinion !
Recorded in 83' at The Vats (old Hamm's Brewery in San Francisco),
and officially put out in 84', although i've never heard any more of
this Demo than the 2 songs on the The Dirty Rotten/Violent
Pacification extended CD.
One of the best bands I ever saw Live !!!!!
On their 83' Tour I saw em' at the Cathay De Grande with Ill Repute,
and a young Stalag 13 fresh on the scene.
By far the fastest bands I had seen to date, although i'd been going
to hardcore shows since 80'.
D.R.I. blew me away ! Played like 40 songs in 30 minutes or something,
barely even took breaks between songs.
Drummer was in nothing but a speedo, and dude was sweating bullets ! :)
Ill Repute was pretty lightning fast for the time also, but not as fast as
D.R.I.
Stalag 13 (who I believe opened the show) were excellent, but not nearly
as fast as the other bands :)
Anyway, D.R.I. holds a big place in my heart, always one of my favorites !
Sound on these recordings are really decent !
Going to see D.R.I. on November 11th in L.A., with Excel and some other
great bands !
Saw them with Excel at The Palace in Hollywood back in 89', think I
still feel the bruises from that night at times :)
Was drunk as fuck, going against the grain in a huge slam of over 100
people.
We used to call that suicide slamming back in the day :)
Was so drunk didn't feel it that night, but for the next 3 weeks was
dealing with bruises and pain all over my body.
Was fearless back then in the pit, but I paid for it ! :)
Ok, sorry for the long winded post, just wanted to share this gem I found
on You Tube with anyone and everyone that loves D.R.I. !