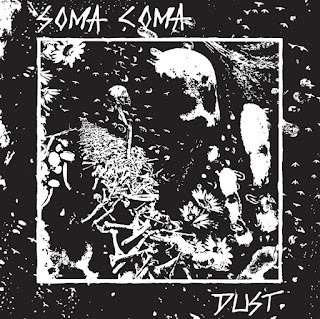 For those of you who don't know of  Soma Coma, they're a hardcore
band from Melbourne, Australia who play unhinged hardcore along
the lines of fast weirdo 80s bands such as Die Kreuzen or Born Without
A Face with more of a scuzzy Australian vibe. This rehearsal tape
precedes the band's demo by two years and showcases a much more
raw, ferocious incarnation of the band in delicious, lo-fi form.
Soma Coma are easily one of my favourite current hardcore bands
in Australia at the moment, and well worth your time. Check em out.
http://fuckedbynoise.blogspot.com/2015/02/soma-coma-rehearsal-tape.html

I start this post off with the review above to give you a perspective on the
band. Review from Fucked By Noise blog.
Now i'll give you my perspective.
I met a dude way back in 2007 or so on Soulseek music program, he
downloaded something from me, and we starting talking on the message
board. He said his name was James, he's from Tuross Head Australia, and
he had a band called Eat A Brick.
At the time, the first thing I asked was "where is Tuross Head ?" :) I can't
remember what his reply was, but as I look at a map now I see that it is
in between Sydney and Melbourne along the coast, in New South Wales.
Next question I asked was "does Eat A Brick have a Demo", and I think
they were in the process of finishing it at the time, but he sent me the
MP3's relatively soon after.
When I heard Eat A Brick, I was blown away, loved that band !!!!!
Then there was a gap of time where Eat A Brick was pretty much done,
and James wasn't totally sure where life would take him.
I lost contact with him for a while, then one day he messaged me again
on Soulseek. He said he had moved to Melbourne area and has a new
band called Soma Coma.
Can't remember who he said is in Soma Coma besides himself, but I
think it's guys that were in other bands prior to Soma Coma. Need
to ask him again, haven't talked to him for a while now.
Anyway, when I first heard Soma Coma I was hooked similarly to
when I first heard Eat A Brick.
Although slightly different sounding, Soma Coma brings forth a much
more raw and a bit noisier approach.
They recently released the Dust LP, which I find to be more progressed
then the early Soma Coma recordings.
This LP is freakin' fantastic !!!!! They still have that raw corrosive sound
I love, and they have grown into their skin more as a band.
One of the better releases of 2015 !!!!!
Soma Coma is currently one of the best bands in Australia in my opinion,
although there are tons of great bands all over the beautiful continent !
All Hail to James and the Soma Coma crew, love those guys !!!!!

P.S - Just want to give a shout out to my buds blog Blunt Sleazy
http://bluntsleazy.blogspot.com/

Posted by OLDSCHOOLMIKE at 11:27 PM