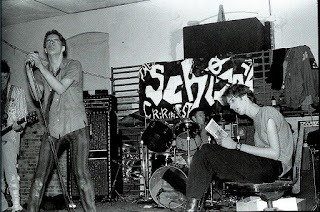 Nardcore/Slimey Valley band The Schizos existed for a few months
in 1979 and split up before any recordings were issued. Let it be known
that all of these tapes have also been given to the band, who are planning
on having the legendary Geza X sprinkle his fairy dust on them for
eventual vinyl and cd release. What you have here are ALL of the raw
and unadorned tapes (the only thing that has been done is a few click
and pop removals and overall sound level boosting - other than that:
nothing whatsoever has been done to alter the sound of these 4 tapes).
So if you are interested you'll want this download as well as the proper
release, once that is issued. Now know this: The Schizos are punk in a
similar way that The Simpletones were punk. They are NOT punk as in
Black Flag or The Germs. So just be aware of that before you download
this. What is included here you ask? Well... you'll notice 4 links. Link #1
is the 1979 Studio Demo as well as all artwork and info. Link #2 is a
complete rehearsal (with bass guitar) from Ron's house in Simi Valley in
Jan. of 1979. Link #3 is a full show from the Rock Corporation in Van
Nuys from  2/7/79'. Finally Link #4 is the legendary complete show from the
Other Masque on 2/16/79 when they opened for The Cramps as a last second
fill in for the cancelled opening act. Again: ALL info and artwork is
included in the first link. This free download has been made available to
you courtesy of the free digital download label "You don't work, you
don't help clean, you don't contribute anything to the household
whatsoever. All you ever do is lay around your filthy room all day and
night and listen to those GODDAMN RECORDS". As far as I know
this is EVERYTHING that exists by the band. Enjoy it.

Ripped, edited & compiled by oldschoolmike & Mike Fey.
Big big thanks and respect to Shawn Kessler (Underground4themasses)
for changing The Other Masque set from mono to stereo. Sounds a world
better !!!!!
Thanks a million Shawn !!!!!
Was great fun doing this one ! Had some difficult technical issues, but all
turned out better than I could have imagined !