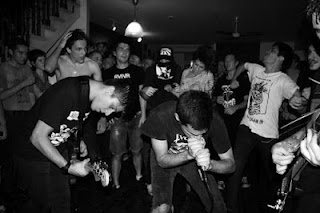 Here lies the now defunct Raw Nerve, they played their last shows
a few months back. This one originally was scheduled to go on Old
Fast & Loud blog, but was passed down to me because of some
technical difficulties. Anyway, Raw Nerve was in the Chicago scene
for roughly 3 or 4 years, putting out raw and frantic hardcore. They
recieved alot of attention early on when they released their Teens In
Heat ep, moving their way into the scene with bold confidence ! They
played many shows in the Midwest, gaining alot more praise along the
way. As well, they were getting alot of attention on foreign shores
early on also. They were planning to do a split with Culo back in
2011, but that never came to fruition. Maybe will come out some day,
at least I hope so ! Here is one of the last recordings of Raw Nerve, Live
set from WFMU Radio in New Jersey. Hate to see when bands end,
especially when they are in their prime, but hopefully we'll se a new
band emerge from the ashes of Raw Nerve, we'll see ! :) I won't
bore you anymore with my banter, so here you go ! I give you the
awesome raw epic stylings of a fucking killer band that will be
surely missed, Raw Nerve !!!!!