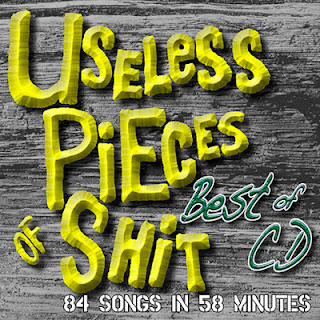 These guys started in the mid 80', straight out from the
burning heat of Arizona. They put out a Demo back in 86',
that really didn't surface til about 2006, Stupid Punk Demo.
43 songs of ripping fast & fun hardcore ! They were raging
fast, with short and to the point songs that usually didn't last
for more then 20 seconds or so at a time :) Really great band,
one of the originators of what we call fastcore today. This cd
was partially split into tracks, but there were about 20 tracks
that had multiple songs and needed to be split. After I finished
splitting the tracks, I only counted 83. There are 81 tracks on
this download, but 2 tracks each have 2 songs, those two were
best left unsplit. So that accounts for 83 songs, although cover
says 84. Oh well, haha, either they made a mistake, or I did ? :)
Anyhow, these recordings are taken from various recording
sessions, as well as Live sessions & such from 86-87'. One of
my favorite Arizona bands of all time, here is Useless Pieces
of Shit, or as alot of people know them as, the infamous U.P.S. !

Posted by OLDSCHOOLMIKE at 3:13 PM