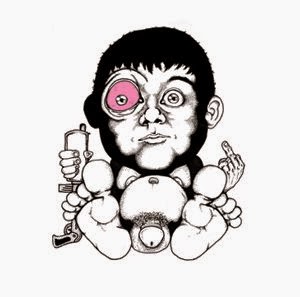 I'm gonna use a review for this post, it explains much better than
me today :) This one has been remastered in all it's glory !

12" EP from this short-lived project featuring Damian "Pink Eyes"
Abraham from F***ed Up on vocals. When this hit the streets it felt
like it was largely in line with the early F***ed Up material, but listening
back to this a few years later I feel like there's a distinct crossover vibe.
It reminds me quite a bit of the Accüsed or Dealing with It-era DRI, but
with Abraham's trademark vocals. In other words, it's tough, metallic,
mega-fast but still insanely catchy and punk.
Slasher Records

I'm not going to write the tracklist on this one, one if the songs is a bit
controversial, and I don't want to create any bad vibes.
Great ep ! Originally came out as a Self Titled 7'', was later repressed
and retitled on 12''.