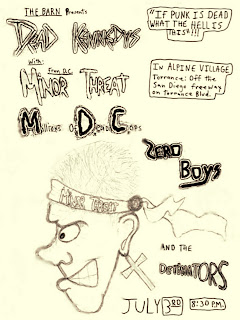 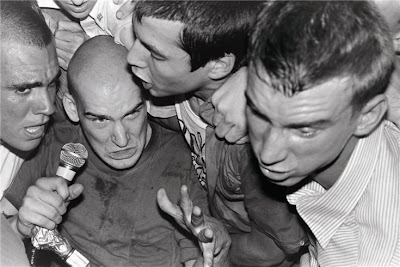 So, to make a long tory short, I found out about this show in June of 82'. Next
step was to try to come up with a plan on how I was gonna get there. I was only
15, no driver's license, and my parents basically said no. Then I remembered,
my Aunt lives near Torrance, and told me I could stay over any time. I thought,
hell yeah, i'll see if it's cool with my Aunt if I hang out with her and my Uncle for
a couple of days, and see if she could drop me off at the show. Totally amazed, my
Aunt went for it, and my parent said no problem ! So, I was fucking excited as
hell to see an epic show! First time Minor Threat and Zero Boys hit Southern
California, and I knew it was gonna be a barnburner ! I drew this flyer attached
to this post about 3 weeks before the show, might be one of the only, or few flyers
made for this show. So, July 3rd comes, and I make it to the show ! The Detonators
started off the show, and played an awesome set featuring tracks from their yet
to be released lp, Emergency Broadcast Systems. Next, a very young M.D.C. hits the
stage, and rips out a full set of blazing hardcore, I was blown away ! I heard them on
the radio once before the show, but seeing them Live, I knew they would probably be
destined for hardcore history ! Next, a band i'd been dying to see after getting the
Vicious Circle lp, the Zero Boys ! This was definitely one of the best and tightest sets i'd
ever seen, they blew the roof off The Barn ! So damn good, the slam was insane for
Vicious Circle ! Then came Minor Threat, a band i'd loved since they began in 80' !
When they started, they were amazed to see and hear that alot of Californian's
knew the words to their songs, and went completely nuts ! There was over 900
people at the show, and the whole place broke out into a pit during Minor Threat.
Totally crazy, bodies flying everywhere ! Every couple of seconds 15 or more people
would climb up on the stage, as 15 or so dove off at the same time, complete
pandamonium ! I had only seen one band before command such utter insanity, and that
was Wasted Youth at Youth Movement 82' just months before. Minor Threat needless
to say, sealed their fame in hardcore history after this show and Tour ! Next came the
band responsible for putting on such a historic event, the Dead Kennedys. It was Jello
that brought out and supported Minor Threat and the Zero Boys throughout their Tour,
promoted the shows, and was the driving force behind the scene back then ! The DK's
played an hour and a half set, was fucking so damn good it was unreal !!!!! All in all,
probably the best show i've ever seen ! Each band played a full set, and I was very
very lucky to have been there ! Fortunately someone actually recorded part of this
show, which my nephew found online. After going through very poorly edited
tracks, I actually had to splice back together, and re-edit due to some technical
issues. Very special thanks to my nephew, cheesemanboat !

Posted by OLDSCHOOLMIKE at 2:15 AM